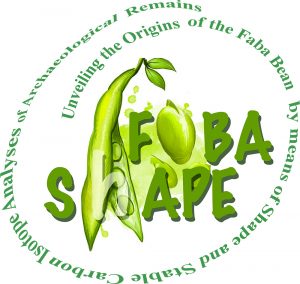 is a Project funded by the European Union’s Horizon 2020 research and innovation program under the MARIE SKŁODOWSKA-CURIE grant (N.792373)

Among these early food crops, the faba bean played a major role because it has one of the longest established traditions of cultivation, having been domesticated more than ten thousand years ago, and is a staple resource in many countries. The thousands of faba beans that are preserved in archaeological contexts from prehistory to the pre-modern era attest to faba’s importance to early sedentary communities.

Despite its importance, little is known about the faba bean’s origins. All living varieties are fully domesticated and no wild representatives of this species or any closely related species have been found. One way to solve the enigma of the faba bean’s origins is to look at the archaeological remains found in the prehistoric villages where hunter-gatherers and early farmers settled and to search for clues to the legume’s original geographical distribution, the ecological requirements of its pre-domesticated forms and the changes induced by geographical isolation and human selection. Tracing the spread of the faba bean from its original centers of domestication is crucial to understanding the impact of adaptation to new ecological settings on morphometric and, indirectly, genetic traits.

The information obtained as a result of this project will serve as a basis for agronomists and plant breeders seeking to search the genome of primitive landraces for useful mutations that can improve the resistance of the faba bean to drought and pests. More stable yields will reduce the risk of famine for human communities who depend on faba beans for their subsistence.